Visit our COVID-19 page for help and information on work options & employing people during this time.

JavaScript has been disabled in your browser.

Please enable JavaScript to experience the full functionality of our website.

This site requires you to update your browser.

Your browsing experience may be affected by not having the most up to date version. Please visit Microsoft to upgrade to MS Edge.

The sector's size and distribution across our state.

Over 400,000 people work in the NSW public sector to deliver a wide range of services to the people of NSW. The sector is divided into nine operational clusters to best coordinate, develop and provide related services and policy. Each cluster oversees the delivery of government services across NSW.

The number of FTE employees in the sector increased by 11,682 (or 3.4%) from 2020 to 2021, to support service delivery and drive the recovery from bushfires, floods and the COVID-19 pandemic.

The sector grew strongly in 2021, but this growth was outpaced by growth in the number of NSW employed persons (up 5.4%), which was the fastest in five years.

The sector also grew relative to the number of NSW employed persons, which contracted for the first time in five years.

Structure of the NSW public sector

The sector is also organised in clusters. The term ‘cluster’ is commonly used for administrative purposes; however, clusters are not established by legislation. The public sector is structured into nine operational clusters, each led by a Secretary, to coordinate related day-to-day public services. 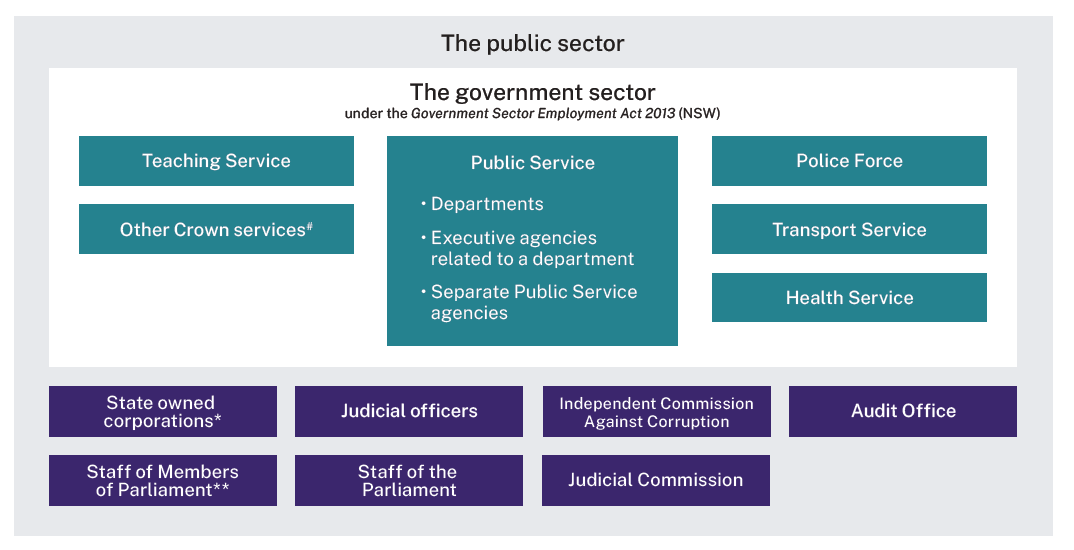 Structure of the NSW public sector: text version of diagram

Also under the umbrella of the public sector, but outside the government sector, are seven areas: State owned corporations*, Staff of Members of Parliament**, Judicial officers, Staff of the Parliament, the Independent Commission Against Corruption, the Judicial Commission and the Audit Office.

# Examples of other Crown services include the TAFE Commission, School Administrative and Support Staff, and Sydney Trains.

** The PSC does not collect data on these employees.

Headcount and contribution to overall employment by NSW region

The NSW Government is a significant employer in every part of the state. Most public sector employees work in Sydney (59.1%). However, the sector contributes relatively more to overall employment in regional areas of NSW than it does to employment in Sydney.

In 2021, 65.7% of public sector employees worked in a metropolitan area (Sydney, Newcastle and Wollongong), compared with 34.3% in regional NSW.

Headcount and contribution to overall employment: text version of diagram

The NSW Government launched a principles-based regionalisation policy to increase the number of public sector roles outside metropolitan areas. Find out how the strategy was developed and the outcomes all clusters are working towards.

The NSW public sector employs people in a wide range of occupations.

Note: To provide a whole-of-sector perspective, remuneration has been aligned with the non‑executive grades defined in the Crown Employees (Administrative and Clerical Officers – Salaries) Award 2007. The GSE Act provides for the Premier to determine the bands in which senior executives are employed. Currently, there are four bands.